We blogged back in December about the user research we were doing as part of a Discovery phase around how the department runs digital consultations. Since then we've wrapped up the project and are cracking on with the next steps, but first here’s the how, what and why of what's been done so far.

Over the course of 6 weeks we set out to identify our user groups and start to develop a better understanding of the experience of digital consultations from each of the different user groups we identified:

As Liam explains in our webinar below, user personas are by no means foolproof but they’re a really useful way to contextualise our users and to think through the challenges that person would typically face beyond the actual task itself. For example, our potential respondent Keith is extremely time-poor due to his caring responsibilities for his son David, so we need to ensure we focus on making the most of Keith’s precious time and avoid making the consultation process more lengthy or complicated than it needs to be. 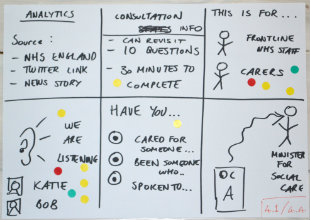 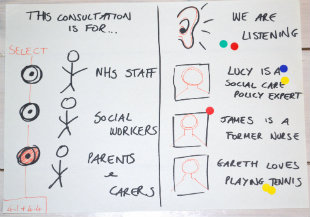 Building on the personas we generated an extensive (but by no means exhaustive) list of user needs, and employed the well-worn technique of card sorting to prioritise these into groups. Each of us took one user need at a time and sketched out some ideas as to how we might go about meeting that need. The group then voted on each other’s ideas and those with the highest ratings got taken back and refined further, until we had a library of prototypes to take forward.

To help us define the shape and edges of a potential service we also ran a design workshop where we took a bunch elements of the service design experience and positioned them on a sliding scale. Let's take this user need as an example:

Currently we only provide for text responses, but how about if people could submit their responses by sending a video or by speaking to a policy maker directly? The team thought this would probably be dependent on audience, so we placed the slider roughly in the middle:

All the user research techniques I've described are common in most Discovery phases and you can find plenty of further advice and guidance in the GDS Service Manual. We ran a webinar with our agencies and Cabinet Office colleagues which explains all this in more detail:

A final thought: as a Product Manager, I was surprised when we realised the solution was not build a new product or service. Instead we could better meet the user need simply by using our existing tools more effectively, and by writing in clear English with regular communications throughout the policy making process. It'll require a fair bit of effort but thankfully no hard cash. Which is always nice.