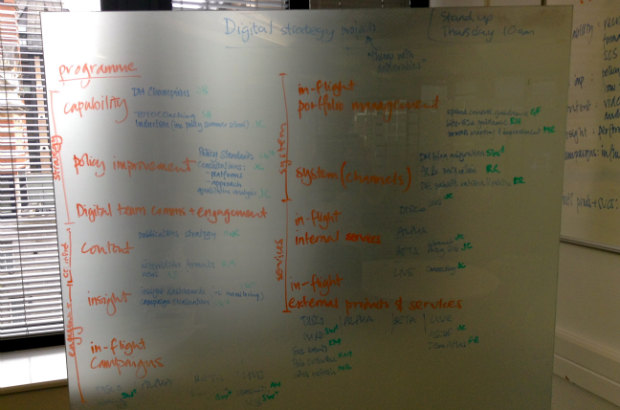 Last March, at the end of the reporting cycle for our 2013/14 digital strategy, we ran a little exercise to review how it had all gone. One of the more pleasing things we found was that our internal communications operation had been fairly successful. People in the department better understood what we were on about. We had shifted our digital awareness metric. In turn, this had stimulated extra demand for our time. People were now having more and better ideas for things we might do. The phone was ringing more.

This is no bad thing. I've spent most of my career trying to increase demand for digital work, persuading people to think more digitally and do more digital stuff. But towards the end of last year, we found that there was sometimes more demand than we could cope with in the digital team.

So this year, we're operating a bit differently to help manage this better. Here's how:

We're committing ourselves to ideas. Last year, we got carried away thinking about projects that we might do in the future. We guessed at what they might involve and when we might do them. Then we wrote them into plans, and were held to account for them, even when we'd had much better ideas in the meantime. This year, we wanted to be a bit more nimble than that, so we're committing to a set of ideas rather than placing projects on a gantt chart 18 months in advance. The big ideas for our digital strategy are:

We're triaging ideas for things we might do. Every idea for a thing we might do, whether it comes from within the team, from elsewhere in the department, or from somewhere else, gets triaged before we start work on it. Triage is quick, and it involves some maths. We ask a bunch of questions about how well an idea fits with the strategic objectives of the department. And then every potential digital strategy project gets a score against each of our 5 big digital strategy ideas. A score of 1 = no improvement on current practice, a score of 5 = potentially revolutionary. A total score of 25 suggests that we really should do it; a total score of less than 15 means it's not yet a good enough idea.

We're defining how projects will end. Last year, some pieces of work remained ongoing throughout the year without really progressing. Big important stuff, that everyone agreed was a good idea to fix, didn't move on. This year, we're addressing this by more carefully defining what we will actually do and who will do it. That means breaking up big pieces of work into smaller projects, assigning people to take responsibility for them, and defining what "done" will constitute when we start something.

We're running a restricted set of live projects. We're currently running 25 live digital strategy projects. The types of project vary hugely, but each live project has clear objectives and timelines, an owner who reports progress at a weekly stand-up, and a project team with enough time to do it justice. Projects only become live when they have these things in place. Even if an idea scores 25/25 it doesn't start until we've agreed them.

We're planning every week. We triage new ideas once a week, and make decisions about where resource is most needed. These are usually very pragmatic decisions, made by the heads of each of the digital teams, about relative importance, and the availability of people.

We're reviewing every quarter. As a result of all of the above we now have long lists of:

We sit down to review and re-plan the whole programme every quarter, timed deliberately to coincide with some of our obligations to report on our work.

And that's it: a handful of simple things we're doing to organise ourselves in ways that better support the kinds of work we need to do. Each of the things we've done differently this year has helped make our planning, decision making and progress a bit more visible to everyone involved. It's not perfect, but I think we all feel a bit more in control of what we're doing as a result. And I think we're delivering more. We've learned how to say "no" when the phone rings. Or at least, we've learned how to triage things before we say "yes".