Over the past few months, we’ve been working with colleagues from across our community of arm's length bodies (ALBs) to understand how we could improve the advice and guidance around digital spend controls.

This has been a partnership between Public Health England (PHE) and the Department of Health and Social Care (DHSC) digital teams, building on PHE’s work to support their teams through the digital spend control process. Read more about PHE’s initiative in Kassandra’s recent blog post.

We already knew there were things that needed improving, but first of all we wanted to understand how the ALBs view the current process and the spend control form.

In health and care the majority of digital projects are delivered outside of the core department, by our ALBs. We spoke to 6 colleagues who often need to complete and submit the form, from 4 of our ALBs: Medicine and Healthcare Products Regulatory Agency (MHRA), NHS Business Services Authority, NHS Resolution and NHS England.

To start with, we used post-it notes to cluster the common quotes and themes that emerged from our interviews. Rather than highlight everything we discovered, here are some of the most interesting and insightful themes that emerged: 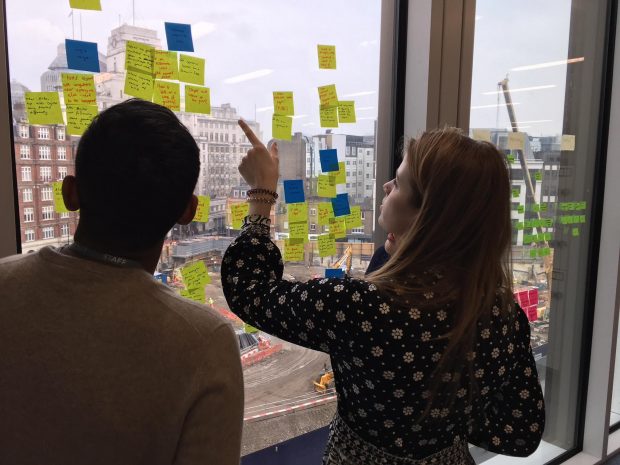 Different ways to do assurance

Our users suggested DHSC rethink the way we do assurance. They said assurance should go to where the project is – rather than the project having to stop or change its approach to fit the requirements of assurance.

Some of the best ideas included:

Personally I agree there should be a limit on digital to stop people creating things in the bedroom.

We found there are problems with the spend controls process, like a lack of transparency, as well as confusion about which controls projects need to go through.

Some of the feedback included:

The spend control people are not there to reject stuff but to make sure we are doing things in the best way possible.

It might be a case of making the form a little bit simpler to understand. It’s a worry if people don’t understand the language and they are filling in the form.

The form itself, unsurprisingly, stimulated a lot of response.

Language is one of the biggest challenges ALBs face when asking their policy/non-digital teams to complete the form. For those unfamiliar with the language of agile and digital, the form is essentially gibberish. It’s clear that within ALBs and even within DHSC, the form is often completed by those from a policy background, and that the language used is a real challenge.

Our users also provided suggestions for improving the form and its guidance. Several people suggested the form should be online, or at least an initial contact or information form. This would let teams make a useful first contact with the spend control team at DHSC, and help triage their requests into an appropriate controls channel.

Finally, there was an interesting 2-fold suggestion that emerged. This concerned the idea of assurance as a service where:

The suggestions and candid feedback from our participants really got us thinking about how we could improve DHSC’s assurance model and the kind of support we can offer to teams doing a digital health project.

Our next steps are to:

The DHSC digital team has also formed a working group with a few ALBs to look at how we can approach portfolio level spend approvals. More to come on that soon.

We need your help

As we wrap things up, we’d like thank our participants for their time and insights. We’d also like to continue this work with ongoing input from the digital health community.

If you’re part of an ALB team and want to help us update, improve and simplify the guidance and support around spend controls, please get in touch with the DHSC Digital Assurance team at support@digitalprojects.zendesk.com.