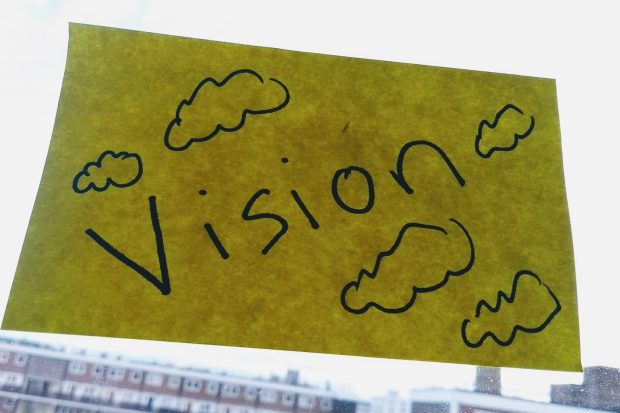 As a product manager at the Department of Health and Social Care (DHSC), my job revolves around supporting colleagues to deliver better services and products. Sometimes this means pairing with a team for a longer period of time and sometimes it’s a quick meeting, an email or a workshop. In this post I’m going to share a method I used to help a team write a vision for an internal product within the department.

The team who requested our help already had an existing product. It was pretty good but wasn’t perfect. They knew a couple of features that needed to be delivered and had some user research to back it up. The one thing that seemed to be lacking was direction moving forward and what to work on next.

So an hour-long workshop was set up to help the team clarify a direction.

Agenda of the workshop

Why do a vision statement?

Firstly, I walked through with the team the value in a good vision statement.

I shared that for me it mostly boils down to:

Others have more eloquently summed up the value, suggesting:

Next I quizzed the teams on some examples, asking which organisations these visions belong to – have a go yourself:

To be Earth's most customer-centric company; to build a place where people can come to find and discover anything they might want to buy online

To become the customers’ favourite for food-on-the-go

I then explained what a good vision usually looks like. I suggested the team aim for something that:

This post is also a nice summary of 10 principles for a better product vision, which you could share and go through with a team.

Base the vision on the needs of users

Before the event I asked the team to share the evidence they had collected. I wanted them to be immersed in the research they had already done. I also wanted them to write something that would be steeped in real user needs.

So on the day I found a wall and put up posters with the following on them:

Underneath these headings I stuck up a sample of answers to these questions that I had plucked from the existing research. In addition to this I had found evidence and research from other teams outside of DHSC who were building something similar and had that in full view too.

On the day, I asked the team to spend time looking at what I had and asked them to add anything missing. This started a great discussion and left us with a great list of needs we could base our vision on.

This activity was very much inspired by the exotically named evidence safari exercise.

Before creating our first draft vision, I added some last minute caveats the team should not forget:

After the caveats we got into the nitty-gritty.

I wanted the group of 4 to co-create the vision from the very start. They had all the evidence in front of them and knew what people needed from the service.

I wanted them to:

This was inspired by the 1-2-4 all technique.

However, time began to run out so I ditched the first part. I spilt the 4 into pairs and they went off and wrote 2 first drafts. I then brought the 2 pairs back together and we all shared our draft visions and attempted to consolidate them into one.

The team were brilliant and began highlighting the bits they liked without any direction from me. They cracked on and tried to construct one that represented all the best parts.

It was really great to see. It’s not an easy thing to do but the team were really constructive with comments and worked through it.

By the end of the session we had a first draft.

While a good vision can be powerful, I knew in this case it wouldn’t magically solve everything for the team. So I invested a bit of time after the event to write up all the things we had created (such as the list of what users need and what the business wants) and some advice on what to do next now they have this vision in their arsenal.

Lastly I also asked for feedback on the workshop (feedback is always good) – here it is:

I think it was helpful in getting down issues on paper. Feedback, we probably needed slightly more time but not a whole lot more.

It was a useful session. I loved the relaxed way that you ran it.

My favourite bit was when we brought together our statements and used the different parts to reach the big statement – this is a very effective way of bringing the best of different perspectives together. I agree that it felt too short, even though we did overrun a bit. People do get worn out in long sessions though. So I would say probably 1.5–2 hours.

Thanks so much for yesterday – I thought it was a great session and very well run.

Suggestions for next time

If you are thinking of running a session yourself, you should: